Oh, Brother is the sixth episode of the fifteenth season of the NBC medical drama series ER. It premiered on November 6, 2008.

Chaz, now a med student, begins his ER rotation. Morris takes him under his wing and shows him some risky procedures, endangering a patient and raising Banfield's ire. Neela becomes upset when Banfield questions her authority and skills in front of her intern. Gates invites Sam and Alex to move in with him and Sarah.

Courtney B. Vance as Russell Banfield 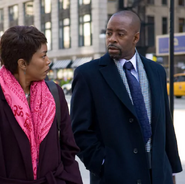