And in the End... is the twenty-second episode of the fifteenth season of the NBC medical drama series ER. It premiered on April 2, 2009. The final episode features the return of the majority of the main characters in the show, such as Noah Wyle as John Carter, Sherry Stringfield as Susan Lewis & Eriq La Salle as Peter Benton. The story of it has Carter opening a new medical facility for the underprivileged in his stillborn son's name while Tony Gates deals with the case of alcohol poisoning when teens played a drinking game. It also has Rachel Greene, a new medical student, back in County General where her father Mark Greene worked.

In the show's final, two-hour episode, old friends gathered for the opening of a new medical facility for the underprivileged, with Carter funding it. Gates treats a teen suffering from alcohol poisoning after playing a drinking game. Sam receives a special and surprise gift on her birthday. Rachel Greene returns to County General as a medical student. Carter and an intern try to save a mother who is in labor with twins. 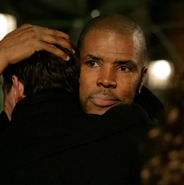